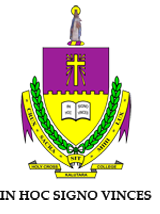 Gold – Holiness to the Lord. (These are the colours worn by kings)

“This school is not the million bricks, but the thousand hearts who carry more dreams than the night sky has stars. This school is the emotions, our stories and our love for each other.”

Holy Cross College Branch School is situated in a peaceful, coastal village Payagala away from the hubbub of Kalutara town. The College has risen like a giant wave on a gentle ocean in the midst of a great quilt of brown and green patches. To the unaccustomed eye the College landscape is a beautiful swathe of rolling green surrounded by walls of unique mangroves, picturesque by any standards.

The milestone in the history of Holy Cross College has been accomplished along with the opening of the Branch school attached to Holy Cross College Kalutara on the 14th January, 2004 at Palapolwatta,Payagala, as to the suggestion made by His Grace Rev. Dr. Oswald Gomis – the former Archbishop of Colombo.

The prior arrangements to Branch school were organised by the principal Rev. Bro. Kumarasinghe in the year 2003. Rev. Fr. Ivan Piterze, the Parish Priest of Payagala, immensely assisted in making the venture a success.

After a successful operation of twelve months, the raging waves of Tsunami completely devastated the whole infrastructure on the 26th of Decmber 2004. At that time the Branch School was consisted of four classes. They were shifted to the Main School and continued the lessons during the afternoon till 18th January 2005.

His Grace, the Archbishop Oswald Gomis donated a land near by Payagala, Yatadola road in order to establish the Branch school and he laid the foundation stone in March 2005. Rev. Fathers of the Kalutara Deanary along with Rev Brothers of the Marist congregation participated for the occasion. Rev. Bro. Clinton Perera, took over the task of constructing the new College building.

In the year 2006, part of the new building was completed and six classes were conducted in the first floor. On the 6th of February, 2006 the inauguration ceremony was held. Late Mrs. Jayanthi Fernando was entrusted with the task of managing and setting the track until 31st July, 2008.

On the 1st of August, 2008, Rev. Bro. Clinton Perera took over the responsibility as the Principal of the Branch school at Payagala untill Rev. Fr. Dr. Camillus Fernando, took over the College management under the guidance of Rt. Rev. Dr. Malcolm Cardinal Ranjith on the 1st September 2010.

Rev.Fr Chinthaka Perera was appointed as the first Principal of the Branch School. Rev.Fr.Sudham Perera took over the responsibilities as the principal of Holy Cross College Payagala from May 2012. He has done a yeoman service to the school during his six years of tenure.

Rev.Fr.Vincent Ashley has assumed duties as the Director of  Holy Cross College Payagala from July 2018 and he extends a remarkable service to the College..

The year 2019 is significant for the College as the Branch School has been declared as an independent school from the government. Now our college is renamed as Holy Cross College Kalutara, Payagala.

Now the Branch school is consisted of almost nine hundred and twenty seven students and a dedicated staff of qualified and experienced teachers.

The College is well resourced with computer and science laboratories, an auditorium, a conference hall, a range of practical classrooms for aesthetic activities, a library with published resources to support their knowledge and a chapel to provide the spiritual support.

“ Our vision is to form a morally sound child,

in the system of education,

who can face the global challenge

“ Our mission is to crate a productive

Generation of students to the world,

Nourished by Catholic Faith and equipped

With knowledge, attitude and skills ”

“ Let us arm, like young crusaders
Neath the Holy Cross, our Guide
Climbing up steep
Wisdom’s side
When we’re passing by the Grotto
Let us pray for Lanka’s sake
That from slumbers that oppress her
She may to the truth awake

CHORUS
Should our names be write in story
Let our college reap the glory
Sons are we: to each. A brother,
Proud we are to call Her Mother;
And when age fallen o’er us
In Her Praise we’ll join the chorus.

Fleet as fly the skimming swallows
O’er our limped, still lagoon
Bright as gleams the glowing pathway
Paved by yon slow – sailing moon
We shall, to our mother, hasten
Eager in our mental quest
Keeping white, the soul within us
By our Faith – our sield and crest.

Let our aims be high and noble
Let us to our Symbol cling
Let us strive to do our duty
Robbing labour of its sting. ”